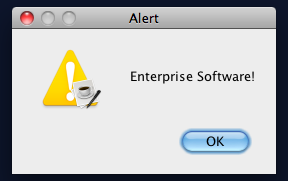 The program is rather big, I guess it had ~300 people for the last couple or so years. I joined late for the program. So, by the time I went there, a massive amount of work has already been done, meaning a huge learning curve for me. On retrospect, I think I did well :)

My team was small, 4-5 people including 3 devs. But we were responsible for really high value enterprise integration work, especially, linking the two most important applications in the program. This was a great place to learn some of the core business domain specific knowledge and I loved it!

However, enterprise integration stuff is full of XML messaging and translation. While XSLT works when it works, in our situation we had too much logic and stateful data involved in the translation. So, we had to write a hell lot of custom code for all the XML messaging… and it sucks! Why?

Service APIs change all the time!

I was mostly writing Java at work in this project for the first time in my professional career. This was a big change as well as a good exposure, considering my recent work mostly being in C# and Ruby.  In retrospect, I would say, I would rather not use Java, its a great platform but offers your an aging language.

Being in the enterprise world means dealing with enterprise service buses, queues, oracle database, weblogic, load balancers, risk and compliance and you name it… sometimes the complexity of these things seemed to be unnecessarily troublesome, but then again, at times they made sense as well.

People factors matter way greater than any other factor in such a big project. In retrospect, I think a hierarchical system often leads to longer meetings, useless communication and less ownership for most people.

I will continue this post to a second episode where I will talk about development practices, challenges with multi-project communication, politics and power relations etc. Stay tuned!